Memorial Candle Tribute From
Davey - Linklater Funeral Home Ltd.
"We are honored to provide this Book of Memories to the family."
View full message >>>
Memorial Candle Tribute From
Sister Carlotta Weymouth
" A pair of" Blazing Blue Eyes" and voice that struck a chill to management's cor"
View full message >>>
In Memory of
Harold Robert "Bob"
White
1935 - 2017
Menu
Plant a Tree In Memory of Your Loved One
Click Here 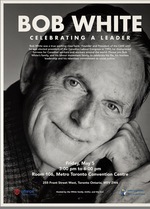 Robert (“Bob”) White, O.C. passed away peacefully in Kincardine, Ontario on February 19, 2017. He is survived by his wife Marilyne, his children Todd, Shawn and Robyn (Michael), his sister Rachel, his three grandchildren, Jordan, Taylor and Landon, three nephews David (Karen), Stephen (Trish), Andrew and niece Sharon (Dwayne) and the many friends he made during his full and fascinating life.

Bob was born in Ballymoney, Northern Ireland in 1935, immigrated to Canada with his family at the age of 14 and settled in Woodstock, Ontario. By 15 he had quit school and was working at Hay and Company in Woodstock, a woodworking factory, where his father was employed. When he started working his father advised him not to become involved in the union. Shortly thereafter Bob decided to attend his first union meeting, became a shop steward and then participated in his first strike. From that point he immersed himself in the labour movement, and in particular with the United Auto Workers Union (UAW). Bob fell in love with trade union life. He believed deeply that trade unions could better the lives of working people, and he committed himself to this cause for almost 50 years. He rose to become Canadian Director of the UAW, a position he held from 1978 to 1984, and then became the founding President of the Canadian Autoworkers Union (CAW). Bob was President of the CAW from 1984 to 1992, and then went on to be President of the Canadian Labour Congress (CLC) for seven years. As President of the CLC he was active internationally, becoming the first Canadian President of the Trade Union Advisory Committee of the Organization of Economic Co-operation and Development (OECD) where he met and made presentations to many world leaders. In Canada and around the world he led opposition to international trade agreements and laws that failed to protect human and labour rights, and he was passionate about equality rights for women.

As a leader Bob managed to achieve the delicate balance of principled and practical in a way that few others can or ever could. His common sense and authentic approach to difficult problems, and his natural connection with both workers and management allowed him to successfully resolve some of the most challenging workplace issues in Canada over a period of decades. His optimism and refusal to give up were infectious.

Bob took great joy in the simple but beautiful aspects of life. He loved sunsets in Port Elgin, walks along the beach, playing a round of golf, and listening to Hank Williams, Leonard Cohen and Louis Armstrong (or almost any other music with a beat). He thrived on meeting new people yet maintained close friendships with many others that lasted for decades, such as his relationship with his good buddy, Al Seymour and his wife Barb. He loved to dance, sing, whistle, laugh and endlessly watch and read the news. He was always up for almost anything, as long as it didn’t involve standing in line (unless it was for ice cream).

Bob achieved many honours, such as becoming an Officer of the Order of Canada, and five honourary doctorates from Canadian universities (for a man who did not finish high school). He was featured in the Oscar nominated documentary Final Offer, which was produced by the National Film Board. When he turned 64 he insisted on retiring in order to make way for “the next generation”. Despite his many personal achievements Bob always maintained that he had been so very lucky in life and he never failed to appreciate his good fortune.

Bob will be greatly missed by his family and friends. His family would like to thank the staff at Trillium Court in Kincardine, the staff at the Kincardine Hospital, and Dr. David Tang-Wai at The Memory Clinic at Toronto Western Hospital.

As he wished, a celebration of Bob’s life is to take place on Friday, May 5, 2017 at the Metro Toronto Convention Centre, Room 106 from 3:00 - 6:00 p.m.. Anyone wishing to make a donation in honour of Bob’s life is encouraged to donate to your local women’s shelter or food bank.


Provide comfort for the family by planting a tree in memory of Harold Robert "Bob" White, please visit our Heartfelt Sympathies Store.